RONE is a strategic post-apocalyptic card game set in a dark world where people are fighting to take back their place after a global nuclear war annihilated all achievements of the human race and all that was left was only a handful of usable resources.

RONE — Races of New Era — is a strategic post-apocalyptic card game for 2 or 4 players. Players are immersed in a dark world full of destruction and suffering, a world where people are fighting to take back their place after a global nuclear war annihilated all achievements of the human race and all that was left was only a handful of usable resources.

The remaining scattered groups of survivors are fighting amongst themselves for dominance over the remnants of the past. Now it is your turn to join the global war and recruit soldiers, battle machines, powerful hybrids, or tremendous mutants into your army. Equip your troops with the best available technologies and show all your enemies who is the ruler of the new order.

Players are represented in the game by their hero and play units or one-time effects (tactics) in an attempt to destroy all cards from the opponent’s deck. The number of cards in the deck and the player’s hand is connected to the number of health points of the player’s hero. For each point of damage that the hero receives, the player has to destroy one of their cards – from the top of their deck or from their hand. Once a player loses all cards from their deck and hand they lose the game. Because each card used by a player during the game costs them a life point, players are forced to play cards as efficiently as possible so that each played card does more damage to the enemy than to themselves.

These combined mechanics create a well-balanced system where every erroneous move or unplanned action can lead to a player’s defeat. Each and every decision is tightly coupled, and even a small decision can completely change the course of the game.

Players have to find a balance between investing in-game control, which allows them to play cards more effectively, or investing in killing the enemy hero, which is the primary goal. This means that players should control their damage output wisely. One can easily feed the enemy graveyard with destroyed cards, which may turn the game completely against them – because of the recycling system which allows players to put cards from the graveyard back on the battlefield. So, instead of dealing massive amounts of damage directly to the enemy hero, waiting sometimes has its benefits.

Timing of attacks, card activation, graveyard management and tactical decisions are the real keys to victory.

This second edition of RONE includes the core game, plus the New Forces and Awakening expansions in one box. There is new content as well, including features, new art, and add-ons. For back compatibility with the first edition, the cards are populated with an expansion symbol to easily distinguish which card belongs to which expansion. 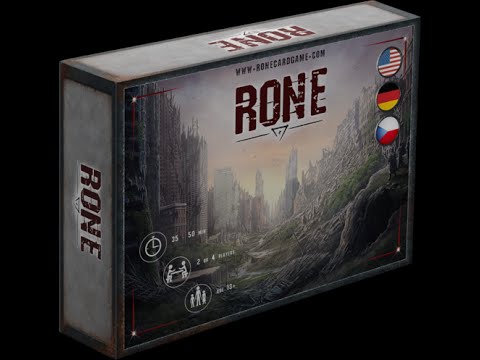